In the middle of rehearsals for “The Devils” at Royal Central School of Speech and Drama, we asked director Ben Naylor some questions about the history of the play, and what audiences could expect from the show….

What is the history of “The Devils”?

I think Aldous Huxley wrote The Devils of Loudun in 1953. It was around the time he started experimenting with LSD and psychotropic drugs, and researching all sorts of esoterica. He was also thinking a good deal of the Second World War, and more particularly the Holocaust – he’d been personally active in rescuing Jews from Nazi-occupied Europe. So the book itself is an extraordinary document of a moment – as much about the post-war shock as early 17th-century France. The story, of a case of demonic possession at an Ursuline convent in the 1620s, leading to a witch hunt and a public burning, is true and unusually well documented for the period – partly because even at the time it was incredibly politicised and controversial. I’ll avoid more spoilers though.

As far as the play goes, Peter Hall was a big fan of Whiting’s earlier plays and commissioned him to write a big “costume piece” as the RSC’s first new play in 1961 – adapting Huxley’s novel was one of two options Whiting presented to Hall. The first stage productions were notorious both in London and later in the USA – Ronald Reagan famously walked out of the LA premiere in 1967. But Whiting died quite young in 1963; The Devils was his last play, and due to its sheer scale – and perhaps its foreboding strangeness – hasn’t been frequently revived. The notoriety of Ken Russell’s film of 1971, which makes extensive use of Whiting’s dialogue and structure, has kind of eclipsed the play’s former controversiality.

With our adaptation, we’re trying to reframe the play’s steely-eyed daring for 2017. When I’m asked about it, I’ve tended to say something like, “The Crucible rewritten by Sarah Kane with Catholic bling.” But that doesn’t really adequately describe the brutality and weirdness of this piece.

I’ve also found myself calling it “a howl of rage.” Make of that what you will.

How does this text speak to an audience in 2017?

I’m not sure. I only know how it spoke to me. It’s a play written at the height of the Cold War, whose audience would all have experienced World War 2. It’s also at the beginning of the 1960’s, with all that that entails: the Beatles and the Stones, the swingin’ summer of love and the counterculture revolution; as well as the Cuban Missile Crisis, Vietnam, the Troubles. A time, as now, of profound cultural change as well as political wakefulness.

I don’t think things have ever felt quite so uncertain in my lifetime, other than perhaps in the immediate aftermath of 9/11. I often think that we’re living now in a geo-political environment mostly ruled by people who don’t remember the last time the world was at war with itself, and are acting accordingly, with short memories. It’s up to artists, among other things, to operate as society’s memory; so maybe it’s at this moment that it’s worth taking time to heed the voices which responded artistically to the cataclysm at the heart of the 20th– century. This play is definitely of that moment.

Trying to make it of 2017 too is a complex task. Visual language, performance style, tempo rhythms and technology – this last itself the greatest cultural shift and challenge of our day – are the tools we’re using as artists to make it contemporary. The context, though, the audience bring with them. As a Londoner of two decades, I’ve found this city a very strange and challenging place in recent months. The play is set at a different time and in a different city, but the challenges feel akin. There’s a stage direction at the top of the last scene of the play which says it all. “The city seems to be on fire.” 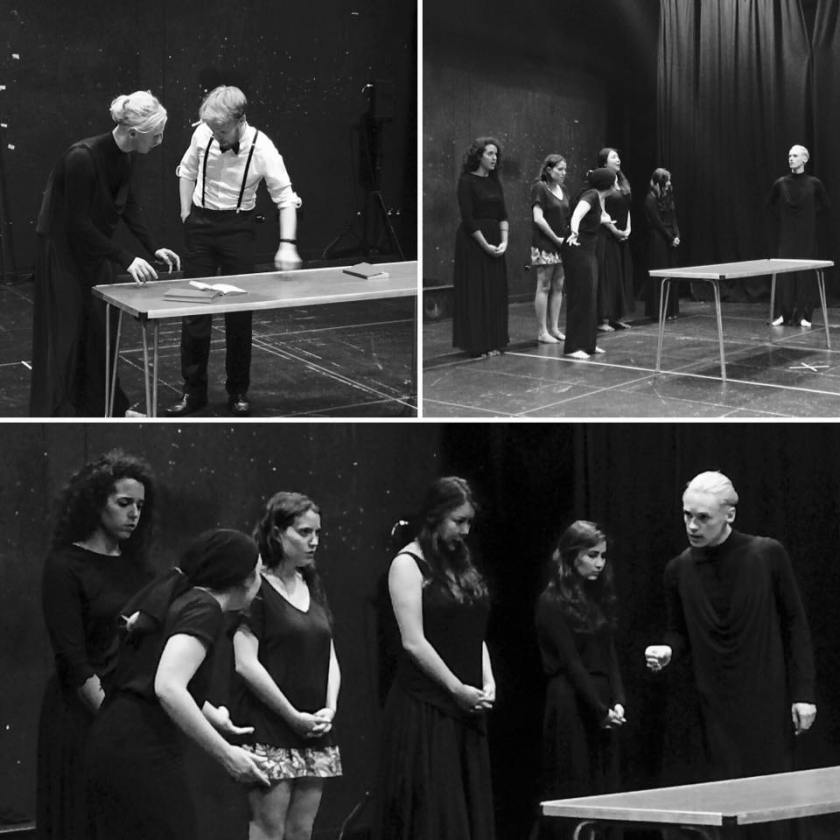 What is the most challenging thing about directing this piece?

I suppose I’d say selecting the stage language we use: what shocked and distressed audiences in 1961 is often pretty mundane now – and there are paradoxically things we’re distressed by that the original audience wouldn’t have found troubling. So we have to think a lot about how to (re)present the material.

Textually, we’ve made many changes, mostly to turn a 3-act structure into two acts. This involves a radical re-ordering of narrative elements as well as a good deal of cutting; Whiting’s conception is epic in the extreme. Hopefully we won’t have sacrificed that element of the play, but presenting a piece written for at least 25 actors (the Broadway production had 45) with 16 actors, calls for extensive creative solutions to what you might call a population problem. Solving that issue – which I hope we’ve done in some interesting and innovative ways – has then driven a lot of dramaturgical and directorial choices.

I try as a director to take very seriously the task of affecting the audience in precise ways. That’s mostly what I’m thinking about in rehearsal for The Devils: how is this going to grab people? Or shock them, or upset them, or nauseate them, or repel them? Occasionally: is there a laugh here? Judging how seriously to take this very extreme material is a constant balancing act; there are some good gags in the text, but there’s also a danger of the violence taking on a Monty Python tone. It’s a constant stylistic balancing act, which I guess is the biggest challenge, and also enormous fun.

Though it hasn’t affected me unduly, I hope, there’s also the fact of the film; and though many people won’t have seen it, people tend to know of it, and what they know is entirely due to the controversy around it. I admit that that’s one of the things which attracted me to the script when I saw it on the library bookshelves at Central. So I guess it’s a piece which, for all sorts of reasons, audiences may have expectations about. I hope we can both confound and exceed all of them.

Tell us about your creative team…

Well, first and foremost there’s the amazing Anna Healey, who’s directing with me. Anna is an extraordinarily talented and sensitive theatre-maker: a movement practitioner, performer and director of great vision and integrity. I couldn’t make this piece without Anna. When we first spoke about the play, after I’d sent it to her to read as a possible choice for this year’s cohort, I knew that we could do something interesting with it. We’ve made four shows together before – Much Ado, As You Like It, The Suicide, and Mary Stuart. I always love working with Anna.

We usually try to build creative teams out of a mixture of previous collaborators and new faces, to keep things reliable and spicy. So we’re working again with Max Dorey (set), Joshua Gadsby (light) and Rachel Hancock (SM), all of whom worked on Mary Stuart last year.

Max is a former Linbury Finalist, Josh a laboratory associate at the Nuffield. They’re both incredibly intuitive and sensitive, with very clear vision. This piece reminded me, when I read it, of one of the hellscapes from Bosch’s great triptychs, The Garden of Earthly Delights and The Haywain – horrifying and strange things happening everywhere you look. Creating the visual language of The Devils requires both creative  invention and technical mastery: I love the work Max and Josh have conceived. And Rachel is energetic, calm, super organised, indefatigable and forward-thinking: all the qualities of a great SM.

New collaborators this year: Dan Balfour (sound), an excellent young sound designer who’s been working as associate on the Headlong/NT hit People Places & Things and on Oresteia (Almeida). The fantastic Manuela Harding (costume design) and Hannah McMahon Major (costume supervisor) are creating characters with great clarity, and architectural visions with flesh and fabric; Manuela’s worked with MA Acting many times, but this is our first collaboration. Shannon Gibson-Durr as DSM has the unenviable job of calling the most complicated show we’ve ever made; and in the early days of rehearsal, never having met me, Anna or any of the actors before, proved her worth by sitting with admirable sang froid through some pretty extreme behaviours …

And with regard to the pretty extreme behaviours, there are the actors, MA Acting’s Classical cohort of 2017. They’re an extraordinary group of young artists, from all over the world, talented, resourceful, intelligent, generous and committed; and in this work are pushing themselves beyond their comfort zones in ways that daily astonish me. I think they’re going to create something very powerful.

Why should people see this show?

It’ll be a fine piece of challenging theatre, with some pretty extreme behaviours. And tickets are very cheap. Also, there are only six chances to see it, so if we get it right and you don’t see it, you might meet someone one day who’ll tell you that you really should have.

Do you have any superstitions?

I have some vestigial OCD, which I think is the same thing. I don’t have faith though.

What is the best piece of advice you could give an aspiring actor, who might be thinking of auditioning for Central?